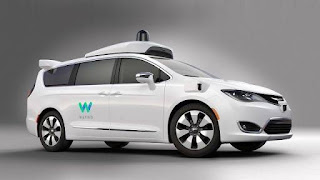 Japan’s SoftBank is putting $2.25bn (£1.7bn) into GM’s autonomous unit Cruise, one of the biggest single investments in self-driving technology.

And Google-owned Waymo is buying up to 62,000 Fiat Chrysler minivans for its autonomous fleet.

The SoftBank deal saw GM’s shares jump more than 10%, the biggest one-day gain since the company re-listed on Wall Street after its 2009 bankruptcy.

SoftBank will take a 19.6% stake in Cruise. The partnership values Cruise at $11.5bn, a triumph for GM which was criticised for over-paying when it bought the start-up two years ago for $1bn.

RBC Capital Markets analyst Joseph Spak said the deal confirmed that GM was one of the top contenders to deploy self-driving vehicles. “GM has a meaningful seat at the table,” he said.

GM chief executive Mary Barra said the company was still “on track” to begin deploying its Cruise vehicles in commercial ride-sharing fleets in 2019.

She said GM planned to launch its own ride hailing and delivery services business but could explore “other opportunities” with some of the companies that SoftBank has funded.

That is a reference to the money that SoftBank’s $100bn Vision Fund has invested in Uber, Didi, Ola and Grab.

The company will begin delivering the first of its 62,000 Pacifica vans later this year.

Fiat Chrysler is also exploring the potential to put Waymo technology into a self-driving car it might add to its model line-up for consumers.

“Strategic partnerships, such as the one we have with Waymo, will help to drive innovative technology to the forefront,” Fiat chief executive Sergio Marchionne said.

That announcement came after the chief executive of Uber, Dara Khosrowshahi, said Waymo cars could be used by the ride-hailing firm.

It comes only months after the two companies were at legal loggerheads over a trade secrets dispute.

Uber suspended its own autonomous car testing in April after an accident that killed a woman pushing a bicycle in a street in Arizona.

Waymo’s chief executive, John Krafcik, has said the company’s own self-driving software is “robust” enough to avoid the sort of accident Uber suffered in Arizona

Photo of the day!

Biggest happenings that shook the world of tech this week.